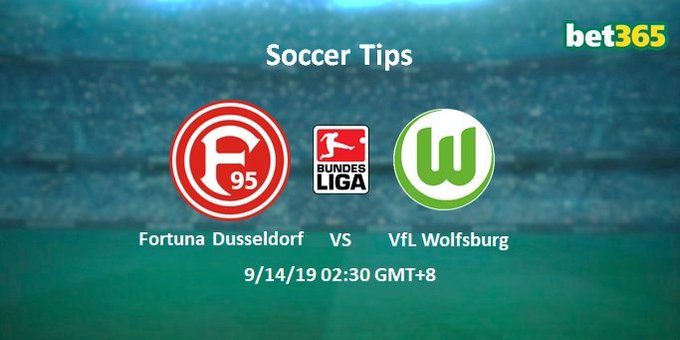 We have noticed the strong start of VfL Wolfsburg in the new campaign and their position is just two points behind RB Leipzig, Bundesliga pace-setters after three matchups. Establishing a great performance on the pre-season campaign focusing on a goal-scoring. The visitors strike it entirely on an interesting thriller 3 – 5 DFB Pokal at the Hallescher FC, in which they only break the clash in extra time and they manage to play creatively! They dominate Hertha with 0 – 3 and Koln 2 – 1 for the 1st two league outings and only viewed the three consecutive winning games by Paderborn 1 – 1 ahead of the international break.

Fortuna Dusseldorf is expecting to end their two consecutive losses in Bundesliga. As they have seen Eintracht Frankfurt with 2 – 1 and Leverkusen 1 – 3 assuring the points, despite of their hard work and challenges. This will encourage them to do more and fewer mistakes as they host Wolfsburg. They are scoring goals on the regular campaign and gives the host ground to build on.

Wolfsburg’s momentum has never seen a defeat on this match and we cannot see it also on the day, as they are in a better shape today and sustaining the edge until for Oliver Glasner and his player kicks off in the field.

VfL Wolfsburg (3rd Place) is undefeated to Fortuna Dusseldorf (12th Place) coming from eight competitive matchups. The last confrontation ended 5 – 2 as seen above the table and this upcoming game we would expect to see a few goals for three or more.

Register now to receive our 50% First Deposit Bonus and 10% Weekly Bonus Exclusive for sports members, only at the best Bet365 Soccer Tips for free from the world’s most trusted online sportsbook.